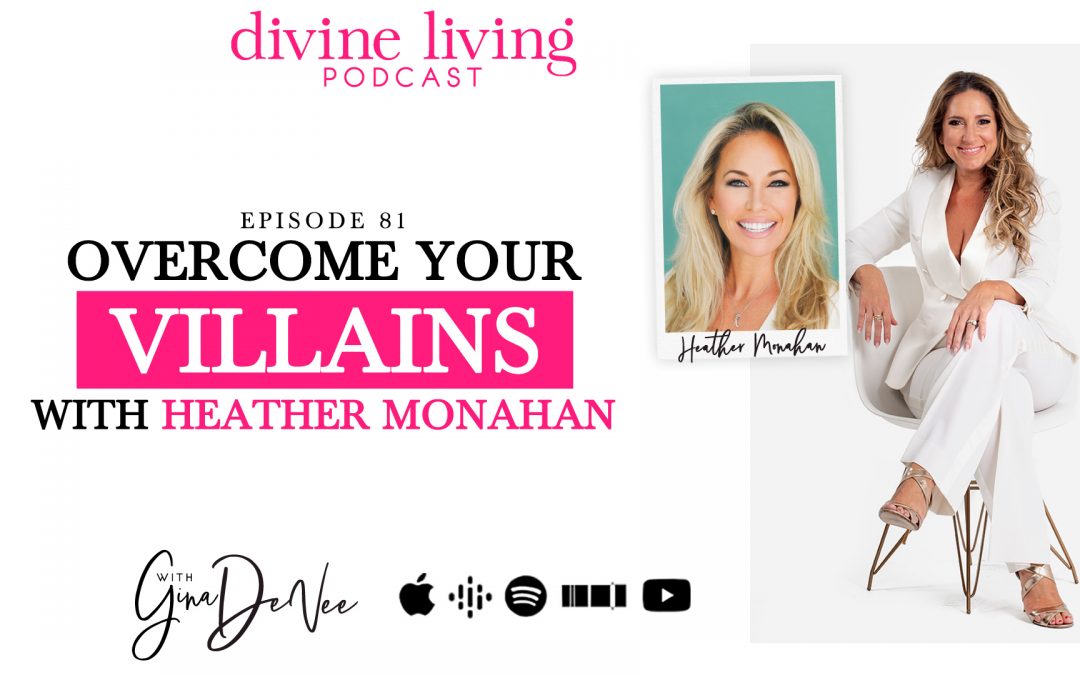 Queen, I am so glad you’re here, because this week’s episode is amaaazing and you DESERVE the knowledge my guest is going to share with you today.

Speaking of guests, ladies and gentlemen, say hello to one of my favorite people: The amazing, gorgeous, brilliant Heather Monahan.

Yesss, I know you recognize the name!! And if you don’t, well, all you need to know is that Heather is a bestselling author, a TEDx speaker, and a professor at Harvard University.

Today, she’ll be sharing with us her journey and she’ll tell us everything about how she went from C-Suite Executive to motivational speaker.

So, if this sounds like something you’d be interested in, queen, grab yourself a drink, have a seat, and give us a listen! I promise, we won’t disappoint.

A Trip Down Memory Lane

Heather grew up poor. One of four kids, she lived with her siblings and single mom in a trailer behind her grandparents’ house. These were her first memories of being a young girl.

The one thing that really stuck with her? She hated food stamps. Like a lot of people who grew up poor and having to use food stamps, she experienced shame, which made her feel like she wasn’t enough and drove her on this crazy journey of making a lot of money.

At 9-year-old, Heather started her paper route. Older, she went into bussing tables at diners and then worked at fast food restaurants. Those jobs were followed by waiting tables and bartending.

Ultimately, Heather says, she was chasing a paycheck because she didn’t want to be poor. However, what she learned through that whole ordeal was how to sell. She ended up (unexpectedly) having 18 years of experience in sales before even landing an actual sales job!

She moved on to work at the gala winery and ended up being sexually harassed at work, so she quit. She then landed in the radio business and had an amazing mentor who believed in her and gave her a huge opportunity when her boyfriend cheated on her.

She ended up in Saginaw, Michigan, and was they youngest in her team. Soon enough, she was making 30 million dollars in sales for that company, and under three years, sha was on the map as someone who could generate revenue fast.

That’s when she left that job and went to a publicly-traded company, pitched herself a job that didn’t actually exist, and became VP of Sales! After 14 years in that company, Heather ended up becoming Chief Revenue Officer.

Saying she was killing it is an understatement. She was named one of the most influential women in radio, but 30 days later, she got fired by a woman who had always been her archnemesis in the company.

That’s when Heather found herself out of work, as a single mom, not knowing how she was going to pay her bills. She had tied her self-worth to her paycheck, to her title, to her team, and she had lost all of them at once.

It was devastating, but she bounced back!! Today, she smiles about it while telling me the story. She also says that being fired was the thing that really propelled her and helped her take off and find out what she was really meant to do.

Her firing was the catalyst to Heather truly working on her personal brand. She had launched it a year before her firing, but didn’t really focus on it until it was the only thing in her life she could focus on.

After that happened, Heather posted about her firing on LinkedIn. Many people told her to take the post down. That looks pathetic, they said. But this was her truth and she had to tell it.

Eventually, the post went viral and that’s what landed her on the Elvis Duran show, which ultimately led to her writing her first book.

Then came the pandemic.

Heather says that it’s completely crushed her business financially. However, some wonderful things also happened during the pandemic.

When the financial hit affected her business, Heather did what she does best. She got on her Peloton (she says she’s at her most creative when exercising) and asked herself: What problem can I solve now, from home?

And it came to her! She always gets DMs, but she never has the time to look through them or process them. So, she opened her laptop, and went through her private messages. A lot of them were asking her if she offered coaching services, so Heather thought, why not? And launched her first ever coaching service on May 1st, 2020, right at the beginning of the pandemic.

And that’s what eventually led Heather to signing a deal with HarperCollins to launch her second book, which she wrote during the pandemic.

Launching her coaching services also ended up leading Heather to meeting a client who was at the bord of directors of a technology company. He nominated her to be the newest member of the board, and today, she’s a member of HealthLink’s board of directors.

And thanks to that nomination, Heather ended up getting a call from Harvard university as well! They were looking for an additional professor for their professional selling and sales leadership class, and she was their pick. Of course, she said YES!

Today, Heather is living her best divine life and thriving as the queen she is! And we love that for her!

Heather Monahan, what an absolute queen!

If you want to learn more about her, check out website here.

We’d also love to know your takeaways, please screenshot the episode and tag us on Instagram! My handle is @ginadevee and you can find Heather at @heathermonahan.

Finally, if you want to make amazing connections, spark creativity, and collaborate with Queens like yourself, come join us over in the Q Club! The Q Club is your new favorite at-home destination for all things Queen: femininity, luxury, spirituality, travel, lifestyle, entrepreneurship, high-vibe community, and unapologetic self-permission. There’s still time to join so don’t hesitate, click here and let the fierce, feminine, and fabulous FUN start now!