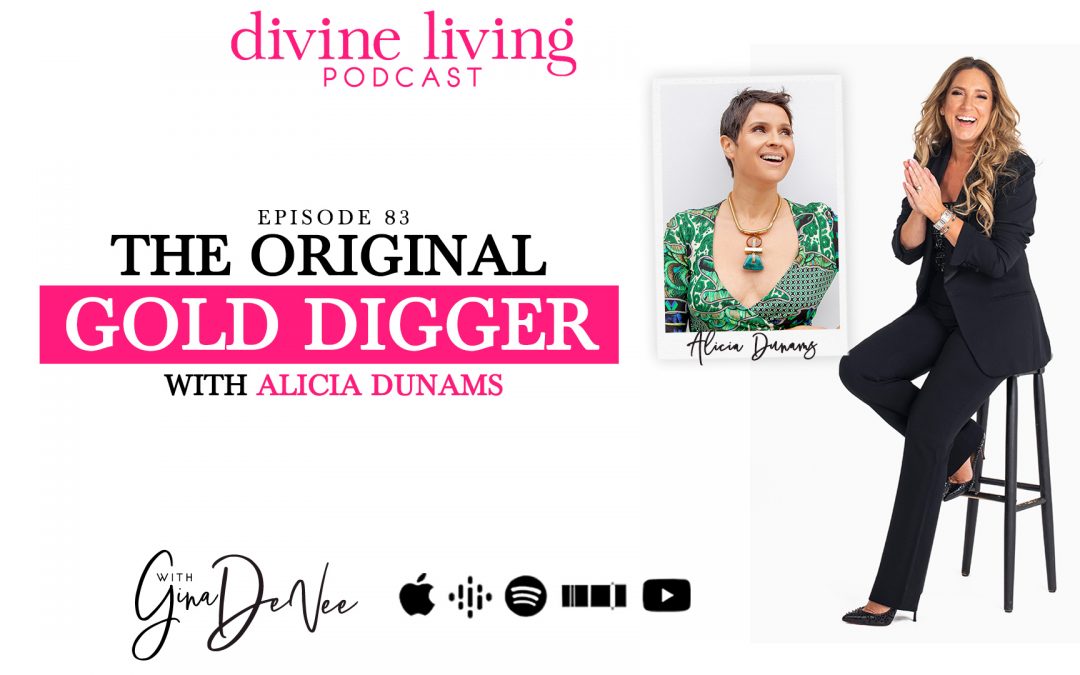 Hello queen and welcome to a brand-new episode of Divine Living!

Today, I’m interviewing one of the most wonderful women I’ve ever had the pleasure of knowing: Alicia Dunams!

Alicia is not only a badass mom and former international model, but also an AMAZING businesswoman!

International speaker, trainer, and best-selling author, Alicia is a jack of all trades and master of ALL of them, and we love her for it!

She’s also a dear friend of mine and I am so excited for you to get to know her, because her story is just fascinating.

Want to learn more about Alicia? Grab yourself a drink and tune in now!

Who Is Alicia Dunams?

Alicia Dunams is an international speaker and trainer who has motivated tens of thousands of business leaders around the world to play big and get the results they want in business and in life.

She has also coached thousands of business leaders in writing, publishing, and marketing their books during her super cool program called BestSeller in a Weekend.

Alicia is also a former international model and, most importantly, one of my dearest friends, which is the main reason why I wanted to have her on my podcast.

Alicia started her entrepreneurial career after she published her Amazon best-seller, Gold Digger: Lessons Learned From the Rich Men I Dated. She is a wealth of information and her personal story is fascinating! I’m certain you’re going to LOVE it!

How was Alicia’s childhood? Well, peculiar would be an understatement.

Alicia grew up in Sacramento, California. She’s mixed-race, with a dad who grew up in a working-class family in New Orleans, Louisiana, and a mom who grew up wealthy in England.

Her dad was very poor, while her mom went to a private all-girls school and was born in Windsor. As you can imagine, they were complete opposites, and yet, they came together and had Alicia (I guess the saying “opposites attract” wasn’t a lie).

After high-school, Alicia went to UCLA. After graduating from college, she made a decision she describes as one of the best things she’s ever done in her life: She bought a plane ticket and traveled around the world by herself.

It wasn’t as easy as it is now. This was back in the late 90s, pre-Facebook and cell phones. Alicia backpacked around the world not once, but twice, and worked as a travel writer. That’s when her story truly began.

At 25-year-old, Alicia had a daughter. A year later, the father decided to leave and she became a single mom overnight. She remembers telling herself: “I guess I gotta bring home the bacon and cook it”.

That’s when Alicia started her business. That same year, she went to a New Year’s Eve party she was invited to by her mom. It was Nicole Murphy’s party. Yes, the Nicole Murphy, Eddie Murphy’s wife at the time.

During that party, her mom’s friends started talking and talking and telling Alicia that she was working too hard. She was doing well by then, she had her business, she had bought her own house, and she was handling her life all by herself.

They told her to get with a wealthy man who can take care of her so she can live just like Nicole. Hearing those words made Alicia feel horrible about herself. She was completely gutted. So, she drove home after the party, picked up her daughter from the babysitter, pulled into her garage, and just started crying.

A few weeks later, Alicia was watching a Dr. Phil episode about gold diggers, and Patti Stranger was in the front row. The guests were describing gold diggers as these women who only date rich men who pay for everything, but Patti disagreed with them.

“Wealthy men”, she said, “want to be with smart, successful women, not with someone who is going to use them”. She also talked about her matchmaking agency, which, she said, put those types of men with the types of women they wanted, and gave out her information.

Alicia decided to contact Patti. She put her pictures together and sent them to her, and a few weeks later, Patti contacted her! Within weeks, Alicia was being flown to LA to be wined and dined by wealthy men. But she was never interested in marrying them or even dating them.

What Alicia really wanted was to learn how these men made their wealth.

From Gold Digger to Launching a Business

Alicia ended up writing her book, Gold Digger, self-published it, and it became an Amazon best-seller! But she wasn’t satisfied. So, she took a look at the New York Times best-seller list and checked which women were on it.

There were three or four women on it; she went and looked at their websites. And she remembers thinking: “Oh, they all look like they’re coaches.”

So, Alicia decided to plan a conference and contacted Loral Langemeier and asked her to come speak at her event. And Loral said YES! Alicia invited a few more guest speakers, and organized her first women’s conference, Wealthy Girl Summit, in 2008.

It wasn’t a moneymaker, but it did open doors for her. Little by little, the guest speakers at her conference came to her and asked for her help to write their own books. And since then, she has been helping people write their books!

She also launched her writing program, Best Seller in a Weekend. And as she says, the rest is history!!

Want to learn more about Alicia’s journey? Then tune in to the interview, because I’d rather you get your questions answered by the star herself!!

Alicia Dunams, what a beautiful soul!

If you want to learn more about her, check out websites here, here, and here!

We’d also love to know your takeaways, please screenshot the episode and tag us on Instagram! My handle is @ginadevee and you can find Alicia at @aliciadunams.

Finally, if you want to make amazing connections, spark creativity, and collaborate with Queens like yourself, come join us over in the Q Club! The Q Club is your new favorite at-home destination for all things Queen: femininity, luxury, spirituality, travel, lifestyle, entrepreneurship, high-vibe community, and unapologetic self-permission. There’s still time to join so don’t hesitate, click here and let the fierce, feminine, and fabulous FUN start now!