Changing the World One Book at a Time with Krishan Trotman 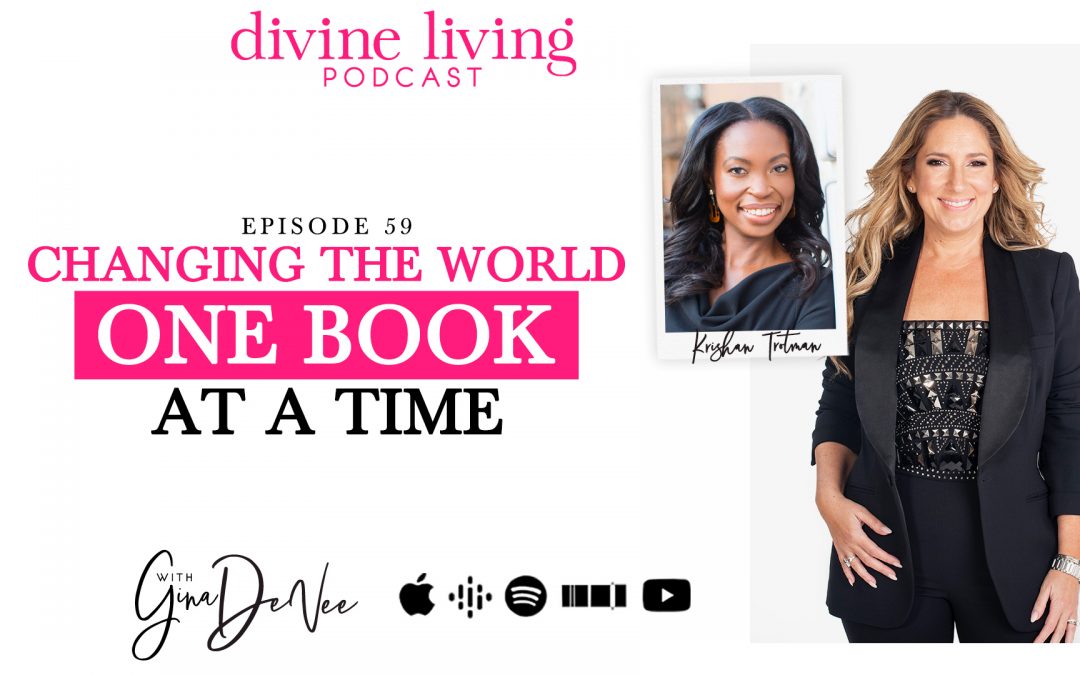 Krishan Trotman is definitely here for such a time as this… Queen! This is an amazing woman, I’m just so excited to introduce her to you today. She’s played such an impactful role in my life and in my career – she’s the reason you have The Audacity to Be Queen today. Krishan is an extraordinary editor, she works at Hachette Books as an executive editor, and she just started her own imprint to support BIPOC and other marginalized authors. You’ll hear all about it in the episode so tune in now!

Krishan’s new imprint Legacy Lit is set to promote equality, equity, and inclusion for all people. Krishan plans to publish books that are bold, mission-driven, dedicated to social justice and empowerment. We are all so excited about this venture, especially because Krishan is so incredibly talented and dedicated.

She has worked with such a wide range of award-winning and bestselling authors, including congressman John Lewis, journalist Stephanie Land, columnist Lindy West, and of course, yours truly. Krishan’s been featured in New York Times, Essence Magazine, New York Magazine, and so many others.

Krishan’s Path in the Publishing World

Krishan studied English at the City College of New York. If there was one thing she knew, it’s that she didn’t want to be a teacher or a lawyer. So, she entered a publishing program at her college in hopes of getting an internship in the industry.

Then one day, she met this amazing Queen who was an editor – she looked like everything Krishan wanted to be. Krishan jumped at the opportunity and begged her to work with her as an intern. She ended up working with wonderful writers, doing multicultural fiction and nonfiction. That was her first taste of the publishing world and she loved it.

Krishan was excited about the opportunity to provide a platform for overlooked voices and bring diversity into the publishing industry. This is a desire that has never left her – that’s why she started her imprint Legacy Lit now.

Krishan’s internship grew into an assistant job at Simon & Schuster. She was happy she got this job – she always had a lot of ambition. It was an incredible opportunity, but she felt something was missing – there was not much room for growth.

She was passed over for a promotion and then decided to leave the job and spend some time traveling. As a kid, she didn’t get to travel much, and after college, she went right into the workforce. The time to explore the world was now. She went to Japan to visit her brother and stayed there for a while.

Krishan also kept in contact with some of the authors she’s worked with at Simon & Schuster. She started working with them and building her freelancing career.

Getting a Dream Job at Hachette Books

Freelancing was great, but then she needed health insurance! Krishan loved being her own boss but when she had a kid, she felt it was time to settle down for a minute.

Krishan got a job at a small imprint. The publishing pace was very dynamic – she did 30 books a year, whereas the average is 10. Krishan calls this time her dark years, but she did learn a lot. And because she had a lot of freedom, she got to meet people she admired. The time she spent there helped her define her own brand.

After this experience, she became a senior editor at Hachette Books. This achievement is all the more impressive because the publishing world is very small and competitive. Everyone who is in the industry does it because they have a passion for the work.

After Simon & Schuster, Krishan didn’t think she would work at a big publisher again. She was happy to be back and she recognized how important were all the risks she took along the way.

The Secret to Krishan’s Success

Since she got a job at Hachette Books, Krishan was promoted three times. She attributes her success to the fact that she always leads with her heart. When it comes to her head, she sometimes feels the imposter syndrome, so in order to remove self-doubt, Krishan focuses on the work that she’s passionate about.

One of the books she’s most proud of having worked on is a book by Stephanie Land called MAID – Hard Work, Low Pay, and a Mother’s Will to Survive. Krishan connected with the author because they were both single mothers and because Stephanie gave a voice to service industry workers who were often kept in the dark. Stephanie unflinchingly wrote about poverty and the struggles she experienced, which moved Krishan to tears. She knew she had to work on this book.

This project was a major success – the book ended up on Obama’s 2019 Summer Reading List. Krishan feels like she has a friendly relationship with the Obamas in general. There was another book she did – Dare to Be Kind – that she sent to Michelle Obama. Michelle sent over a letter with a blurb, which was a great breakthrough for both the writer and Krishan.

Krishan is thankful for her success and looks up to God for guidance. She knows that if she persists and continues doing what she loves, God will keep surprising her with miracles.

Krishan explains that in the publishing world, each house has different rooms – these rooms are imprints. One big publisher can have several smaller imprints that do their own thing. Krishan just got the highest honor of her career and has launched a new imprint at Hachette – Legacy Lit, dedicated to BIPOC and marginalized voices.

She got the idea after the events of summer 2020 and the death of George Floyd. There was a forward movement in the publishing world dedicated to bringing more diversity to the industry. Yet, Krishan felt like the idea would be forgotten in the sea of meetings. She’s seen it happen before and she decided to do something about it.

Krishan spent the weekend outlining her proposal to present on Monday. She was determined to get something tangible out of these meetings, and that’s how Legacy Lit was born.

She called the imprint “legacy” because she wanted to build a new legacy in publishing that would publish all people equally and with equity. Krishan wants to use this imprint to do what it takes, and not just talk about uplifting authors of color and helping them find their audience and become successful. She’s ready for real, tangible action.

Talk about a Queen who’s been put in this position for such a time as this!

Going Towards Her Dreams With Grace

I asked Krishan if she was afraid to take such big steps. She told me she’s not fearless, but she didn’t really have too much fear. She’s seen herself succeed and she’s seen herself fail. Krishan knew she had what was needed to lead this imprint, but she was also ready for rejection. The question that’s always in her mind is: “Alright, so what’s the next step?” As an editor, she focuses on the chapter she’s at, and that’s how she approaches life too. Krishan is deeply tuned into the present moment and concentrated on the thing she can do now.

She’s also incredibly honest and bold in her pursuits – proposing to start this imprint was a risk. It was something editors generally don’t do, especially someone in a position such as Krishan. But, my Queen, ask and it shall be given. Krishan asked for what she wanted when many people in her place would think that proposal was too much. She put her faith in God and allowed herself to be led by the spirit towards her desires.

Isn’t Krishan so inspiring? We had a long and wonderful conversation and Queen, I really want you to hear it. Tune in now and check out Krishan’s website where you can learn all about Legacy Lit and the Queens of the Resistance series she co-authored.

We’d be so honored to hear your takeaways! Screenshot this episode and tag me and Krishan on Instagram at @ginadevee and @krishantrotman. Let’s get talking, my dear Queen!

Be sure to subscribe to the Divine Living podcast, share your reviews, and tune in every week to get one step closer to your Queenhood!

And Queen, if you liked what you heard today, you’re going to love the Q Club!

⭐ Some women spend their whole lives waiting for that special spark to elevate their spirit and launch them into their next level… that doesn’t have to be you!

You now have the unique opportunity to come join me in a FREE, 5-day online retreat & discover what you were divinely designed to do!

Queen, we’re taking things to the next level… Click here to join now!