Turn Rejection Into a Billion-Dollar Business with Jamie Kern Lima 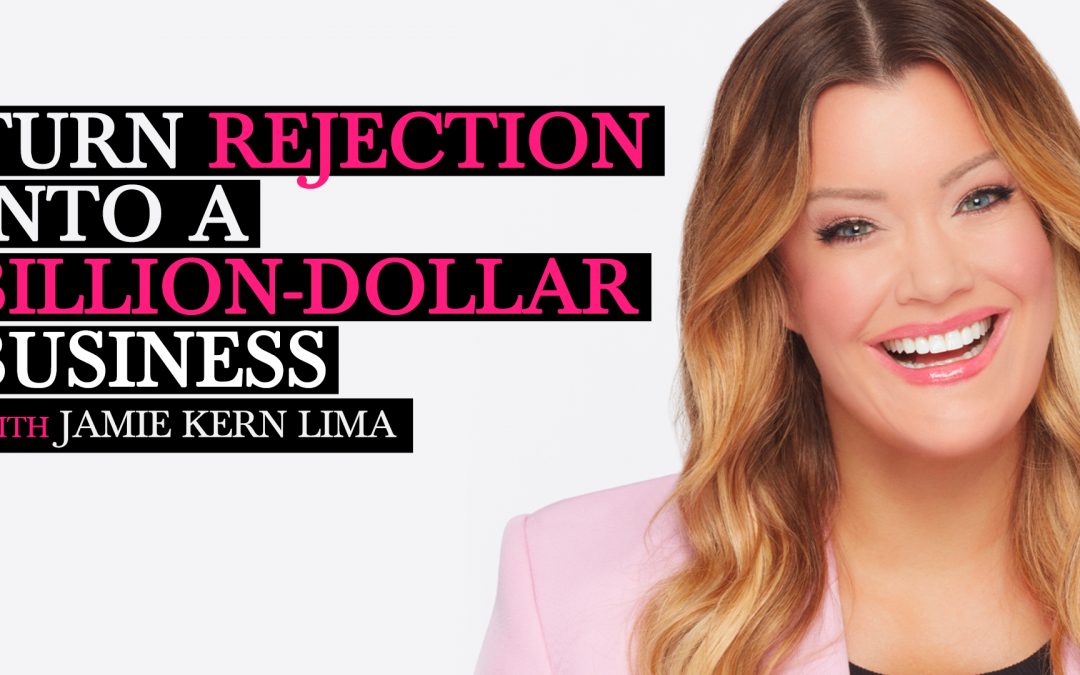 I have never been more excited, honored, thrilled, and maybe slightly obsessed to interview anyone on my podcast than I am today! I had the privilege of interviewing Jamie Kern Lima, founder of IT Cosmetics and a human extraordinaire. You are going to love, love, love this conversation!

In case you don’t know her, Jamie started her cosmetics company in her living room. She grew the company into the largest luxury makeup brand in the country and then sold it to L’Oreal in a billion-dollar deal.

Her love of her customers and remarkable authenticity and belief eventually landed her on Forbes America’s richest self-made woman list. Today she’s the mother of two, an active investor, speaker, and thought leader who’s passionate about inspiring and elevating women.

We discuss her amazing new book Believe IT, how she turned rejection into outstanding success, and why you DON’T need to work 100-hour weeks to succeed!

Setbacks Are Blessings in Disguise

Jamie’s journey was filled with so much rejection. She thought her dream job was interviewing people on TV. She loved that career but at some point, she was faced with what at the time seemed like a setback. Jamie was getting hereditary rosacea and there was no makeup in the world that could cover it on camera.

She could hear producers in her earpiece during live shows, saying: “You have something on your face”. She knew she couldn’t just remove it and she was having a lot of self-doubts. Jamie was afraid she would lose viewers or get fired, and she couldn’t find a solution. There was no makeup that worked. So, she decided to start her own brand and offer something for women with all kinds of skin challenges.

The thing is, Jamie would have never stepped into her true purpose had she not been faced with that setback in her journalistic career. Setbacks are really God’s set up for what we’re supposed to do. The most important thing we can do when faced with setbacks is staying in faith.

These setbacks are hard, they sometimes don’t make sense and sometimes they feel incredibly unfair. But, we need to choose to believe that we’re in a season of gaining strength to carry the weight of the things we really want to manifest once they do happen.

One particularly striking story of Jamie preserving in face of rejection was when she went shopping for an investor. At the time, their bank accounts were low and they were just looking at the light at the end of the tunnel.

They finally got an inbound from a potential investor. They had built up a lot of consumer product companies into household names, so Jamie was naturally very excited.

They loved the product, the meetings started, they were doing their due diligence. It got down to the last meeting with the head investor. He thanked Jamie but told her they decided to pass.

She wanted to know why, she wanted the feedback. He told her he just didn’t believe women would buy makeup for someone with her body and her weight.

At that moment, a lifetime of body image issues and self-doubt flooded Jamie and everything went slow-motion. She went to her car and started crying, but at the same time, she had a really powerful feeling that he was wrong.

She knew she was on a journey where it would come down to her believing in herself and nothing else.

At the time, this was a big setback. They were going bankrupt and Jamie was ready to sell. The thing was, had this investor not rejected her, she would have never made the deal with L’Oreal. She wouldn’t have been the largest stakeholder either.

So this setback turned out to be a setup for what was really supposed to happen. Six years later, they sold the company to L’Oreal. This was a company Jamie started in her living room, that sold for over a billion dollars in cash. It was the largest US acquisition made by L’Oreal in their history. They had to release the price and it was in the news. The investor from the beginning of the story? He wrote Jamie an email to wish her all the best. Had he invested in her, it would have been the biggest investment for his company.

It was through this story that Jamie understood that rejection was really God’s protection.

Take the Emotion and Resentment Out of Rejection

It’s not easy to deal with rejection, especially for very empathic people like Jamie. But, she realized early on, the only way to succeed is to take the emotion out of it.

Every time she was rejected, and there were many such times, she made a decision not to take it personally. It’s human to feel resentment and the need to prove yourself in face of rejection, but Jamie decided to project confidence and excitement, every time.

Every time they launched a new product or had a press placement, she would send an email to all department stores and investors that had rejected her. She would share her excitement and express the hope that she could share this with their customers someday. It might have seemed crazy to them, but Jamie felt it was necessary.

Even L’Oreal passed on her company a couple of times before going all in. They are a global brand and they weren’t sure Jamie could make it outside of the US.

They eventually caved and Jamie got an amazing deal, the biggest in the US in her niche. All because she made a decision that no matter how much rejection she got, one day she would have the biggest brand in their portfolio.

Learn to Believe in Your Inner Knowing

On her path to success, Jamie knows she did so many things wrong. Because she wants to make a real impact in the entrepreneur community, she wanted to use her book Believe IT to share the real stuff. Her hope is that her stories will make people feel less alone and help them step into that person they’re born to be.

And really, her journey is not about how she built a billion-dollar company. It’s really the story of a girl who went from not believing in herself to learning how to believe in herself.

Jamie also used her book to share the things she did right. It’s the mindset behind all the times when she was rejected and kept getting back up. She didn’t have proof of success, investors didn’t believe in her, paychecks were slim, and the company was barely staying afloat for so long.

It’s so easy to let those voices build up into your internal self-doubt. They are so loud that we can’t even hear our own gut instinct anymore, or we confused the two.

The thing Jamie did right and the secret to her success are in the fact that she learned how to stay still. She learned how to listen to her own inner knowing. She made a decision to always trust that voice. Sometimes people reject us or tell us we are not worth it, and they might even be right.

But, regardless of that, we need to turn up the volume on our own inner voice. When Jamie thinks about the mistakes she did make, they were always the result of her not trusting herself at that moment.

The journey is not about creating a billion-dollar company. It’s about putting in the work to learn how to hear your own truth and then trust it.

My dahling Queen. I’m just SUCH a fan of this woman. I’m not even trying to flatter her, but her book Believe IT is one of the best books I’ve read in… forever. Please, go get it NOW!

We’d also love to know your takeaways, please screenshot the episode and tag us on Instagram! My handle is @ginadevee and you can find Jamie at @jamiekernlima.